A Tale of Two Investors 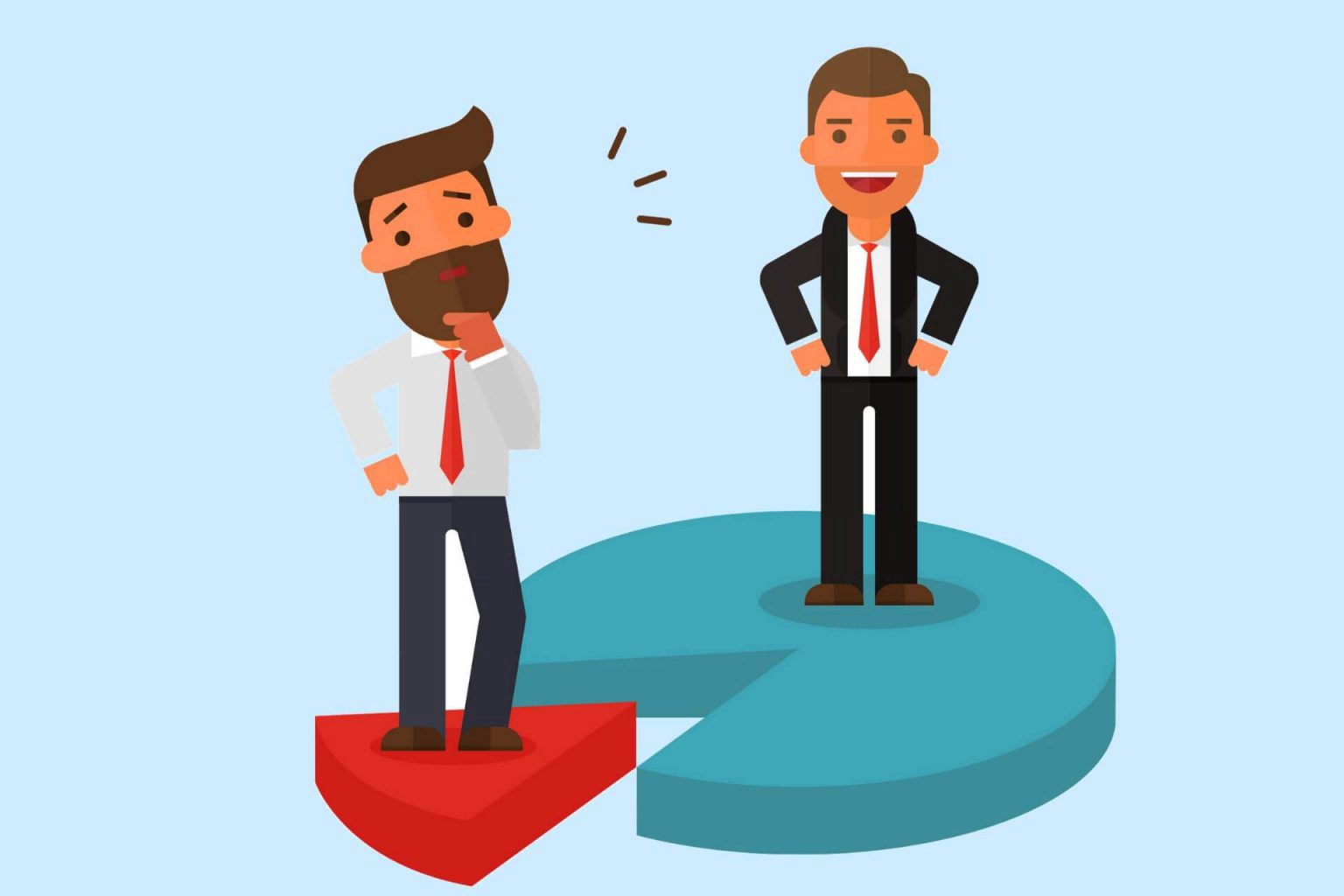 Not a tall tale. I’ve seen and heard this play out numerous times. In fact, the genesis of this article was a request from a friend for a deep dive into this topic.

We learn by paying attention to others (their mistakes, their wins, their lessons).

We also learn by doing (riding a bike, tying a shoe, playing a musical instrument).

And we learn vicariously, whether we like it or not, by subtle societal cues (go to school, get a good job, pay off your mortgage, invest in a 401k, repeated over and over).

Interestingly, these so-called ‘subtle’ societal cues don’t tell you not to obtain a mortgage to purchase a house – it is the American dream, you know (never mind that a house is your worst investment, although you have to live somewhere) – but they do insinuate that once you have debt, paying it off is tantamount to financial success.

(News flash – paying off your mortgage doesn’t increase your asset count; it only decreases your debt load).

Safe Sam has an interesting set of circumstances. He is the happy recipient of a cash windfall in the amount of $80,000 (and let’s assume that this was either a non-taxable event or that the $80K represents the proceeds after taxes). Ironically, $80K also happens to be the balance on his mortgage. He and his family purchased the home for $150K several years ago and financed $120K. Safe Sam was smart in that he was determined to save up the entire 20% down payment on his own. He wanted to have instant equity that a 20% down payment creates. Also, he knew he could afford the $644.19 payment on $120K which, incidentally, after about 15 years and 5 months of paying on the $120K (30-yr loan at 5%), leaves one owing $80K.

But now Sam is excited about being able to fully retire the mortgage and burn the papers. He likes the idea of being able to save an extra $644.19 per month. He may decide to put this extra money in mutual funds or save up for a bitcoin. Side note: he’d be more interested in a bitcoin if it were something he could hold in his hand or build a home on.

Paradoxically, Self-taught Tom has the exact same set of circumstances but for one critical factor. In the 15 years and 5 months since the origination of his mortgage, he educated himself.

He noted that the most successful people he had observed in life had tended not to follow the herd. He also had learned, as well as observed, that real estate ownership was the most likely contributing factor to any random millionaire’s net worth.

These factors made Tom nervous about giving up a lump of cash to pay off a debt he didn’t have any problem affording every month.

He wondered, could I put some velocity to this money and have it work for me? I mean, I’ve worked for money my entire for life and I’m ready to start being my money’s boss and CEO. (Hey, I like that – I’m the CEO of my own money.)

Being a self-taught, independent thinker, Tom already knew that due to the effects of inflation,

While Tom knew he didn’t want to pay off his mortgage, he also wondered whether there was a better alternative than dumping it blindly into the equities or fake asset market. (If you purchase a handful of shares of XYZ company, does the board of directors really care what you think about how they intend to run the company?)

And Tom wasn’t pleased with how mutual fund earnings are calculated and distributed – that he could be subject to tax when the fund in fact lost value.

Was there a way that he could harness the $80K for reliable monthly cash flow and more?

Having perused the real estate listings for some time, he had his eye on an income property that was listed for $400K and produced $3,200 per month in gross rental income.

Doing some quick “Lee Math” in his head, budgeting for property maintenance (Tom certainly wasn’t going to put on a tool belt and personally deal with tenants, toilets, and termites), Tom realized that after all monthly expenses including a 5% maintenance reserve and a vacancy reserve,

$675 per month cash flow was the absolute worst he could do with this investment. Probably better, but I like being conservative.

Naysayers would be quick to point out that a 3200/400K or a 0.8% rent-to-value ratio may be impractical in this day and age of inflation and bidding wars, but that is not the point. Before the pandemic surge, rent to value ratios of 0.9% or 1.0% were the norm. The point is that when you study the numbers, not the Wall Street hype, you will learn the answer. “Back in the day,” one liked to strive for a 1.0% or greater rent-to-value, but interest rates were higher “back in the day.”  0.7% to 0.8% rent-to-value represents a profitable scenario in this era of cheap money.

$675 per month is more or less what Sam saved by paying off his mortgage, using Lee Math.

But what Tom is getting, that Safe Sam is not, is:

And Same really isn’t saving $675 per month. Because he lost the interest deductibility, he also lost about $90 or so per month in income tax savings (this declines with the balance on the note because the payment allocation changes to a higher and higher amount of principal and lower and lower amount of interest.)

So, ladies and gentlemen:

Tom wins. Not to mention that he also created the cash flow from which to pay his mortgage payment.

There is no conceivable way that these numbers can be manipulated to present a financial different picture.

Sam:  “I don’t have a mortgage payment anymore. I win!” (Some will never learn).

Tom:  I invested my $80K and although I still have a mortgage payment, in addition to creating the cash to pay it every month, my first year return on my investment of $80K was over 50%!

When you perform the analysis for yourself, as always, do what helps you to sleep at night.

Because, yes, there are caveats:

Yes, you may or may not have the appetite for debt.

Yes, real estate can have issues. A water heater may fail (we’ve budgeted for that) or your structure could burn down (you’re insured for that).

Yes, you may be in a favorable financial position already and you couldn’t care less whether or not you own more real estate and more cash flow. You simply want to pay off your mortgage so your heirs aren’t saddled with an encumbered asset.

Yes, it’s been a seller’s market. You may have to look at 100 opportunities to offer on 2 or 3.  Who said it was going to be easy?

Yes, perhaps you don’t like personally dealing with real estate at all (no management and no looking at properties.) OK, then participate in a syndication in which the investing and asset management and property management are conducted by a team with a track record. The reputation and history of the general partner is what keep this from being a typical “by others” situation.

I don’t care if you invest in real estate or not. I don’t sell real estate. I buy it. And I’ve learned over the years from my successes and failures as well as those of others  (remember the Jim Rohn quote at the beginning?)

Tom was so happy with his results that he refinanced his mortgage (his home was now worth $200K) and pulled out another $80K and did it again.

Yes, his payment went up. But his cash flow went up more.

I’m not telling you what to do.

I simply want you to know how the numbers work. Because I can absolutely guarantee you one thing – you can open the pages of a typical financial periodical and read ads from a mutual fund company, but you will never read a deep dive into Safe Same and Self-taught Tom from those sources.

Like I always say with building science and value engineering topics,

“By others” are two of the most dangerous words in the English language, whether they are talking about construction/development or your money.

Especially when they are used together.

As always, I give ideas, not advice. Except the advice to think for yourself.

A Tale of Two Investors