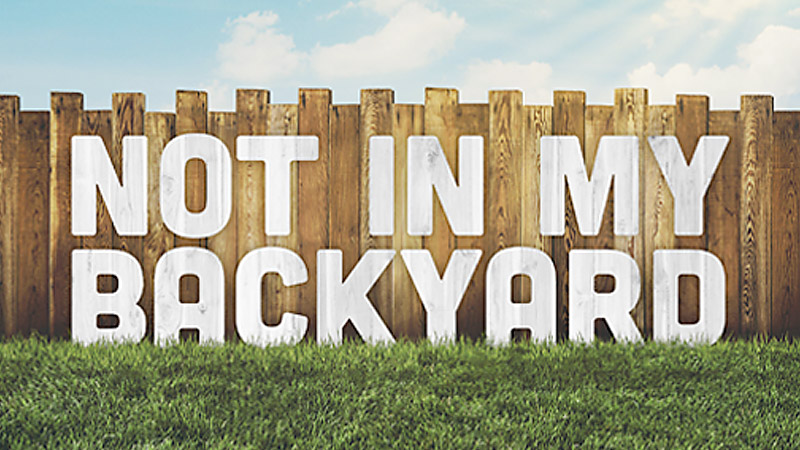 NIMBY is an acronym from the urban or slang dictionary; you’ve probably heard of it before.

It means, “Not in my backyard.”

It is typically used as a noun to refer to an individual who, for whatever reason, is opposed to plans for a specific development in a community.

A resident may be opposed to a developer’s request for a variance or a special use permit (SUP) for a project. These two items are basically exceptions that are requested so one doesn’t have to conform to the existing rules as written. The resident wants the Authority-Having-Jurisdiction (AHD) to hear his or her concerns about granting an exception.  Maybe the resident doesn’t want a high rise apartment building in his or her neighborhood.  Some NIMBY objections may be completely understandable if they pertain to proposed plans that may be out of touch with the long range plan of a community and its residents (taxpayers).

So, to clear the air, NIMBY is neither good nor bad. It simply is.

But in some cases, NIMBY concerns are immature and unfounded:

Recently, I had a couple of meetings, same day and same time, one with a township zoning board of appeals, and the other with a city planning commission, where NIMBY concerns rose to the forefront.

I wasn’t at either meeting…because I had a previous commitment with my wife to attend a charity dinner…for an organization that provides housing to the homeless.

At the zoning meeting, the discussion revolved around my request for a variance in order to split a parcel of land in half.  The parcel was large enough such that the resultant parcels would indeed exceed the minimum width for a residential lot in that zoning designation, but the resultant parcels would violate the depth-to-width ratio which the township defines as 3 to 1 for a maximum.

In other words, the resultant parcels would be too deep for their given width.

I felt I had good reason to ask for a variance because:

Since I wasn’t able to attend the zoning meeting, a friend presented on my behalf.

“Lee, you should have provided a bulletproof vest,” was one of his post-meeting comments.

“Wow, the parking lot was full and everyone had shown up to protest YOUR variance request, not the other three on the agenda,” was how the chairperson of the zoning board of appeals described the meeting to me in retrospect.

“I’ve looked at ducks on that property for years and years,” was one objection.  “I enjoy looking at deer as long as I’ve lived here,” was another.  “I don’t want headlights shining into my living room,” was yet another.  Finally, a whiny “the township told me I couldn’t build on that property due to the wetlands.”

It turns out that every single objection was irrelevant.  The question of whether or not the property ought to have a variance in order to be split in the requested manner had nothing to do with building any structure on the property.

And building on or around wetlands requires a permit from EGLE, the Michigan Department of Environment, Great Lakes, & Energy – a higher authority than the township.

Once that agency grants a permit, the township building official still has to approve any construction plans.

BUT EVEN IF THE REQUEST INVOLVED CONSTRUCTION, the concerns would remain invalid because private property rights of individual neighbors do not extend to preventing uses granted by right on other parcels pursuant to the prevailing zoning ordinance.

I mean, the property was for sale for years…why didn’t you purchase it?

I’m glad I wasn’t at the meeting.

As an aside, do you know that some communities are not zoned?  In other words, there are no regulations about building, setbacks, lot coverage, etc.?  I’ve never owned land in one of these areas.  But a good example is a recent family trip to Pennsylvania.  As we drove through old, small towns, it became apparent that something seemed “different” about the homes and businesses, but it took us awhile to put our finger on exactly what was different.

Finally, it dawned on me.  “The houses and buildings are almost on top of the road!” I exclaimed.  “There are no setbacks!”

In one community in which I’m building, the front setback is 30 feet from the ROW – meaning you have to build 50+ feet from the edge of the road!

No wonder something seemed different driving through Pennsylvania, where the faces of houses were 5 feet from the edge of the lane of the road.

(I’m not saying that Pennsylvania has no zoning ordinances.  Zoning ordinances could have been developed after such structures were built…there are some old towns in PA.)

Q:  You spoke of two development meetings that night – how did the planning commission meeting go in the other town?

A:  Let’s save that discussion for next week…it’s too lengthy to add here!

Q:  From last week (9/20/21), did you ever reach anyone at the bank that erroneously paid your property taxes and did the commercial loan officer at the same bank ever return your call?

Many of you had read last week’s blog post and had asked for an update on those situations.

For those of you wondering what I’m talking about, read last week’s blog post here.

I’ll still try to pay the property taxes that were rightfully mine to pay, but I’m moving on to a different commercial bank with the other question.   Because I know that the merger of the bank in question (which is actually Bank B, the secondary bank) with an even bigger bank (Bank C) won’t make communication any better.

There’s this old saying about having noticed some written communication on an interior partition.

P.S. For firsthand evidence of how you can remove yourself from the rat race through real estate investment, download our eBook below.